Content Management Solutions for the Design
of discerning Websites

Are you considering relaunching your Website or planning a whole new Project? You want a stable, yet flexible basis to manage your content in a state-of-the-art manner? PANSITE offers you countless functions for the maintenance of your Internet Presence. With the Content Management System, you quickly create well-structured Websites in an appealing design and an up-to-date technology. Take advantage of the simple handling, which requires no programming skills, and edit the content via Browse&Edit directly on the page. Thanks to the differentiated Role and Rights Assignment, it is also possible for a large number of editors to concurrently work on the Website. Even extensive Internet Projects can thus be implemented quickly and reliably.

Browse&Edit allows you to work directly on the live page without programming requirements.

Automatically optimize your Web-Presence for any device

How our customers use
PANSITE

PANSITE as the basis for the
new Evonik Brand Portal

Evonik Specialty Chemicals understands its brand as a promise that is continuously confirmed through good performance and thus secures the trust of its customers. To keep this promise, Evonik commissioned Panvision with the technical implementation of its new brand portal. A space has been created in which the brand is lived every day by every employee.
"The continued development was necessary in order to be able to use the greater diversity of new media formats in a single and cross-media appearance for the Evonik brand. Flexible guidelines ensure that current and future means of communication can work equally, "reports Markus Langer, head of the brand communication department at Evonik. 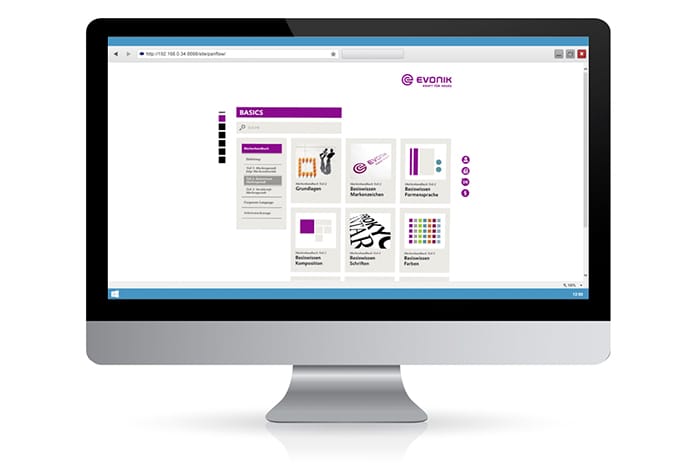 In order to facilitate the entry into the new brand design and to realize the transition from the brand handbook to the brand experience space, Panvision developed an interactive, personalized brand portal based on the conceptual specification of Evonik's lead agency "KNSK" on the basis of PANSITE.NET.
Here, both Evonik employees and external communicators, such as agencies or consultants, can find numerous tutorials and templates in addition to general information and explanations of the new brand (diagrams, tables, displays, business equipment, mobile screens, etc.) that facilitate the direct implementation of the new design guidelines.
The content on the overview pages is maintained by the editor via the CMS PANSITE and is automatically compiled with a search query via the high performance search engine. The results list - with the corresponding search results - is displayed dynamically in a modern tile optics.
In order to further simplify the brand-compliant creation of communication media, the area "World Wide Work" was developed - a global gallery in which all published communication media are uploaded, documented and presented to other users.
In order to realize the concept, the functional scope of PANSITE has been enhanced by specially developed user controls - small applications that manage the mixture of classic content and special user-generated content.
To get quickly to the desired information in the wide-spread Evonik brand portal, a search engine is available to the user, whose hit list is further targeted by numerous filter options (category, keyword, format, etc.).

Interactive, personalized brand portal for a single cross-media appearance of the Evonik brand

World Wide Work area where all published communication media are uploaded, documented and presented to other users

The functionality of PANSITE has been expanded through custom developed user controls: smaller applications that manage the mixture of classical content and special user-generated content

About four years after the last relaunch, which had already been carried out in cooperation with Panvision, it was again time for Warema to update the appearance and structure of its Internet Presence incorporating to the latest technology and to set standards with an audience-targeted design. To this end, the expert developers at Panvision worked closely with the editorial teams at Warema and their collaborating agencies to finish the major project in a goal-oriented manner. 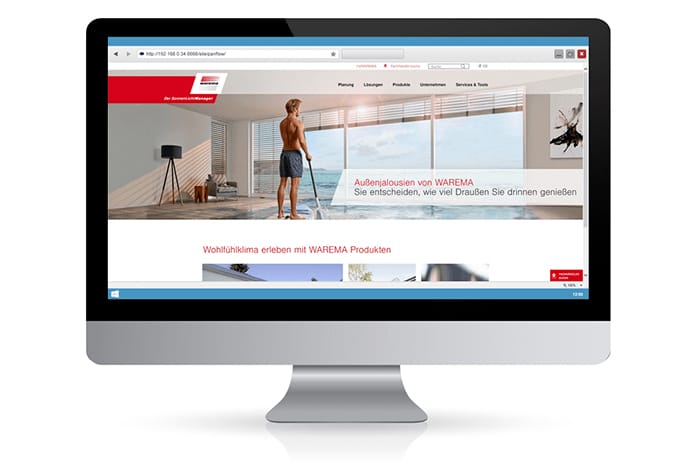 From the first moment in the Start menu, the user can choose whether to retrieve target-group specific information (e.g. for architects, electricians or resellers) or to find out about certain products and solutions from Warema. For this purpose, the contents were restructured thematically and the structure of the pages was designed to adapt to the information needs of the respective user or target group. Thus, every visitor of a page can purposefully and intuitively explore the world of Warema and find the content that suits them.
The new website meets all current modern standards both technically and visually. In addition to the implementation in Responsive Design, which ensures smooth use on all common mobile devices, the entire visual messaging on the website has been reworked in elaborate detail and the user experience was made more exciting with the Parallax effect. In addition, editors were given new opportunities to customize the pages dependent on content and on their department and subject area. For this purpose, an unprecedented range of new PANSITE special elements was developed in order to tailor the Content Management System exactly to the needs of the company.

Page structure adapts to the information needs of the user

Complete re-work of the Visual Messaging

In time for the 50th anniversary of the Company, the Website of Klöckner Pentaplast, manufacturer of plastic films, underwent a general overhaul. The old page structure was mapped into the Content Management System PANSITE and the entire content was transferred from the old Website to the new within a short time for both languages German and English. The appearance was completely reworked technologically: the old Website was rigid and inflexible, the new on the other hand features a Responsive Design and can be conveniently reached and used via mobile devices. 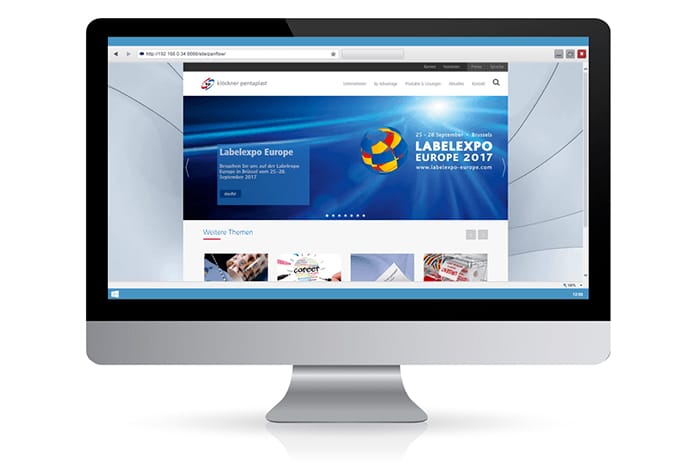 As part of the relaunch, the Job Market component of the company website was also renewed from the ground up. In the future, both those responsible for personnel and applicants will benefit from the more elegant solution for the application process. A authorized administrator can now use the wizard to create new postings or view and edit not yet published postings. If a job advertisement has been made, the system also creates a PDF version of the file in which each change is reflected.
In order to simplify the actual application process and to automate repetitive processes as much as possible, the decision was made for the additional integration of a PANFLOW workflow. As soon as the applicant has completed and submitted the form on the website, the responsible contact person will receive a confirmation of the receipt of the new application. If the contact confirms receipt, the applicant receives a feedback that the data has been sent successfully.

Fast transfer of existing content onto the new Site

In order to portrait the lived patient concern and service orientation to the Internet, numerous Knappschaft Hospitals have commissioned Panvision with the relaunch of their Websites. Created on the basis of PANSITE, they now have many novel features to help visitors navigate through the online pages of hospitals and provide additional service. A special feature is the uniformity of all Web Pages to the common design, while maintaining the differentiation in the content. This allows users to quickly find their way across departments and hospitals. 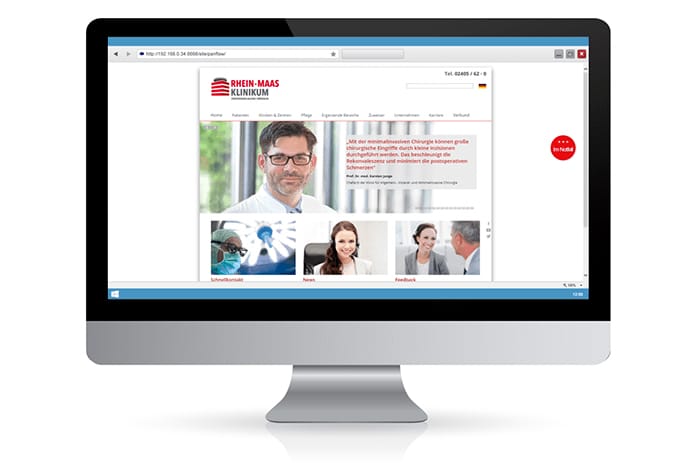 Reach your destination without Detours

A special highlight of the new Website is the Body Map, an interactive graphic that represents the human body and its organs and that can be accessed from any page as an integral part of the Web Presence. When a visitor clicks on an organ or a body region, the map shows which of the two clinics has a specialized department for the relevant area. Via the color-indicated fields in the list, the visitor is directly guided to the relevant clinic and department without having to know medical terms. There key data is shown and the user can explore the information about the team and the services offered. It is also possible to contact the respective Head Physician directly or to arrange an appointment for consultation.
Another way to access the contact details of a particular department directly is to use the "Quick Contact" function, which is available on every page, just like the Body Map. Here you can select the clinic and the appropriate department with just a few clicks. The visitor will then be able to get into contact directly by phone or e-mail or to visit the information page of the department.

In addition to the new extras for the user seeking information, the Website was supplemented by another feature: the Get-Well Card Service. For an enhanced recovery or congratulations, a greeting card with your personal favorite motif can be selected from any computer via the new Website of the Klinikum Vest. This can be digitally augmented with sender information, receiver and an individualized message. Everything else is provided by the Hospital that prints the cards locally free-of-charge and personally provided to the patient by a member of the staff.

Body Map Graphics, which, by clicking on the various organs, interactively informs which hospital has a specialized department for this area

Key data and information about the team and the services offered

Integrated function to send Get-Well cards via the hospital's Website. These are delivered to the individual patient directly by the hospital

Relaunch of the city portal
www.gelsenkirchen.de

With about 80,000 visitors per month, the city portal Gelsenkirchen.de is a sought-after destination on the web that informs citizens, tourists and employees about everything worth knowing about the City in an always up to date form. The original Web Presence, last modified in 2004, by gkd-el was starting to show signs of age and now longer meeting today's increased demands. In collaboration with editors of the city of Gelsenkirchen a completely restructured site was developed and presented to the public. Panvision is proud that the choice had once again been made for the Content Management System PANSITE. 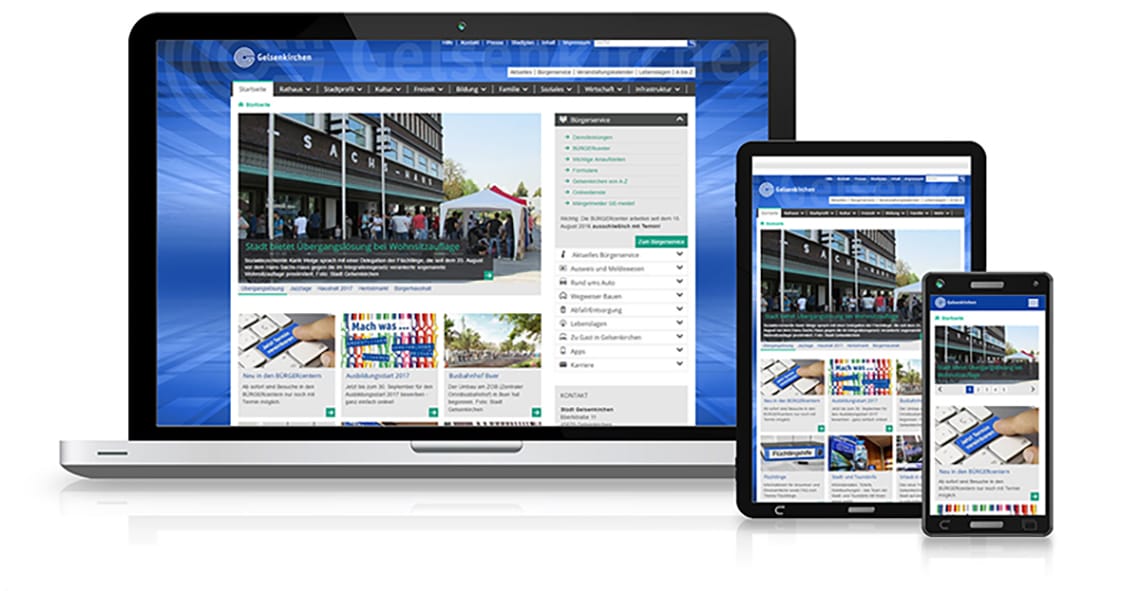 Since the city of Gelsenkirchen went online in the year 2002, it has continuously developed its Website. There were a number of aspects that played an important role in the choice of the right editorial system. Ultimately, however, it was determined that PANSITE had all the technical prerequisites for the realization and also impressed through the user-friendliness and intuitive operation on the editor's and administration end. After 13 years, the Gelsenkirchen Municipal Data Centre Emscher Lippe and the city of Gelsenkirchen renewed their cooperation with Panvision and continued to use PANSITE for the relaunch of the Website.
Through the use of PANSITE, all the requirements that led to the development of the new city portal could be met. The extensive content of the Website was restructured and the navigation was modified for clarity and ease of use. The various subject areas were additionally expanded slide shows, which emphasize the most important messages in image and text in a prominent position. At the same time approximately 170 editors worked with the software and brought the Web portal on-line and on schedule.
Finally, about 1,200 pages of information, offers and services were created, including the newly established civic service and the event calendar, which displays current events in each category. In the area of "Citizen Service", the user now finds all the services of the city administration, arranged reflecting different everyday situations, so that (s)he can download the appropriate forms before visiting the corresponding city department.

"In the new approach, gelsenkirchen.de is more than just the Web Presence of the city administration. It is the whole city in one presentation," said Mayor Frank Baranowski. The Web Portal has become the online flagship of the City of Gelsenkirchen, which encourages interaction and strengthens the feeling of community of the citizens. The new Website is also attractive and clearly arranged for mobile phone users. Thanks to the Responsive Design, the most important menu items can be reached quickly and easily via a customized navigation, even on the road.

Reworking of the navigation